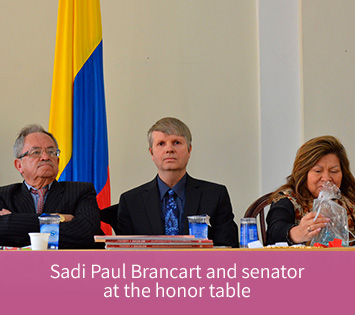 It is a great honor to receive such a prestigious award for peace and human rights, represented by the highest recognition, the "Magna Cruz Bolivariana". I am extremely thankful to everyone who valued my work and trusted me to receive this honor.

I have been living in Colombia for 6 years, 4 of which I served as ambassador and the other 2 as a Colombian businessman. I have had the pleasure of discovering this country, which used to be foreign to me.and it has been such a great experience!

Colombia has survived a tragic history since it was founded, but these last 50 years have been the most terrible: Colombian society has suffered so much sorrow and loss and the concept of human rights has been absent, peace was just an abstract concept. 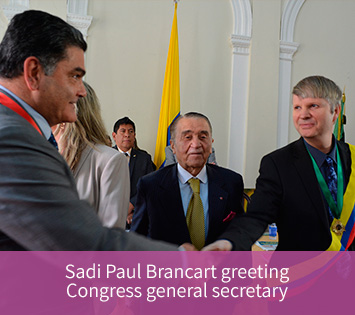 Today, I receive the "Magna Cruz Bolivariana". I had never thought that Simón Bolívar would ever be part of my life in such a way. Before he died in Santa Marta, on December 17th, 1830, Bolívar was disappointed and discouraged; he declared throughout his life he had done nothing but "plow on the sea."

I'm not here to remind you about all the details of this country's history, however, in the last 10 years, a shed of hopeful light has emerged. Thanks to the hard work, the courage of successive governments, and a better disposition of the parties in conflict, a slow but steady advancement towards peace could find its starting point.

In fact, this country, which used to be considered a less than recommendable colleague, little by little, has regained confidence in the possibility of peace, thus recuperating the lost international trust. . Journalists played an outstanding role in this transformation. The almost superhuman efforts have allowed for the country'ssecurity to begin to find its place.

Throughout my years in Colombia, I have been able to witness the incredible progress that has been made. Of course, life is still hard for many, but it's clear that this country is surfacing. Yes, it has undoubtedly and inevitably been shaken by the economic crisis that is hindering most of the world. However, Colombia stays above the majority and with the progress of achieving peace, economic growth will be more robust. 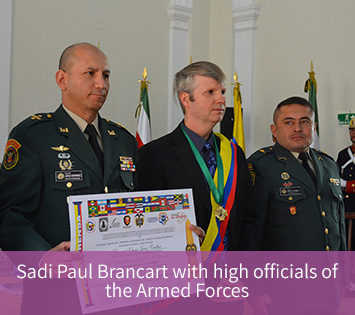 The quality of life is being improved in many sectors, such as health and education. The education of young Colombians has nothing to envy compared to Europeans or gringos.

But it is in the field of human rights where the landscape has changed. Nowadays, Colombia is aiming to heal the wounds of the too many victims of the conflict and respect everyone's dignity and freedom. Whether they are disabled, women, LGBT, racial and religious minorities, or those who have lost everything, they need to know that the fight for their respect has already begun.

While peace and human rights are being threatened around the world, Colombia has surfaced like a lighthouse, an example to follow. It has managed to achieve the unthinkable thanks to the determination of its leaders and to the unbreakable willpower of its people.

No! No, Simón Bolívar, you did not "plow on the sea." The seeds you planted had to face adversity, but today, a Nobel peace prize that comes from the land of snow, all the way to our warm land is the proof that your efforts and your followers were not in vain.

Thank you, don Simón
Thank you everyone
Thank you, Colombia
SADI PAUL BRANCART
Ex-ambassador and General Manager of Imago Consult